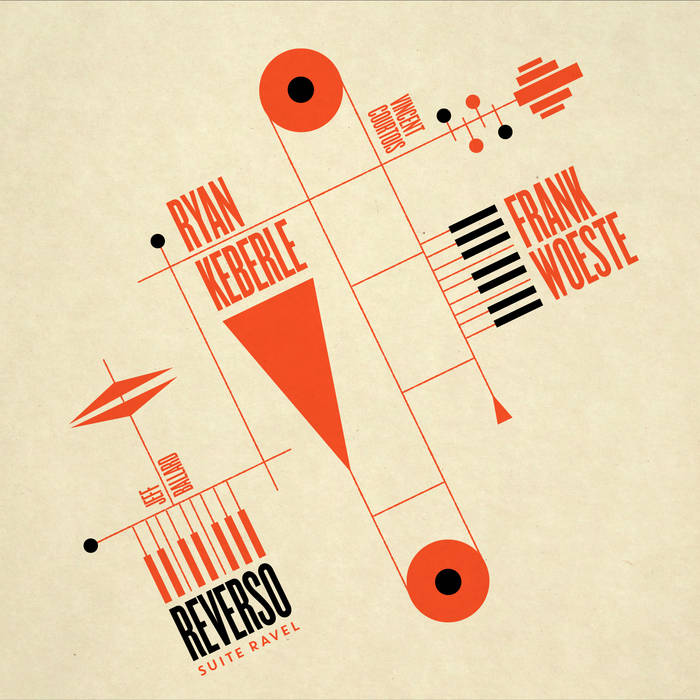 The Nonsemble Somewhat familiar with Ryan's work - and a HUGE fan of Ravel (due to a past life), I was easily intigued.

I wandered in - to and through a few of the REVERSO tracks and found my way directly to the bank.

I love it already.

no_0f Never been a big fan of Ravel but this album is awesome! Favorite track: Dialogue (feat. Jeff Ballard and Vincent Courtois).

Not many composers have inspired jazz musicians as often or as intensely as Maurice Ravel. Ironically, Ravel was one of the first 20th century classical composers to acknowledge Jazz as a valuable inspiration. During his US tour in 1928 Ravel said:

“You Americans take jazz too lightly. You seem to see it as a music of little value, vulgar and ephemeral. In my point of view, it is jazz that will give rise to the national music of the United States.”
— Maurice Ravel, April 1928

Keberle and Woeste show us that jazz and “classical” music have become even more intertwined in today’s music world, since they began to intersect amongst Ravel and his contemporaries such as Satie, Stravinsky and Milhaud over 100 years earlier, mutually inspiring the other’s practitioners.

Keberle and Woeste draw particular inspiration from Ravel’s “Le tombeau de Couperin”, a suite for solo piano by Maurice Ravel, composed between 1914 and 1917, in six movements based on those of a traditional Baroque suite.

Bridging the Atlantic through support from a French American Jazz Exchange grant, Woeste and Keberle explore the classic six movement French Baroque suite working with the characteristic movements of the Prelude, Fugue, Forlane, Rigaudon, Menuet, and Toccata, re-defining these movements within their own unique compositional languages while sometimes incorporating Ravel’s original melodic, harmonic, and rhythmic material.

Ryan Keberle and Frank Woeste met in 2015 while recording with acclaimed trumpeter and composer, Dave Douglas, where it became obvious that they had much in common musically. Shared backgrounds in jazz, but also in the classical and popular music traditions, made this collaboration a meeting of the minds made all the more intriguing with the addition of acclaimed French cellist, Vincent Courtois, and the French-based American superstar, Jeff Ballard, on drums along with Keberle’s trombone and Woeste’s piano.

Background on the artists can be found at ryankeberle.com and frankwoeste.com

This project is supported by the French-American Jazz Exchange (FAJE), a program of FACE Foundation and Mid Atlantic Arts Foundation, in collaboration with the Cultural Services of the French Embassy.