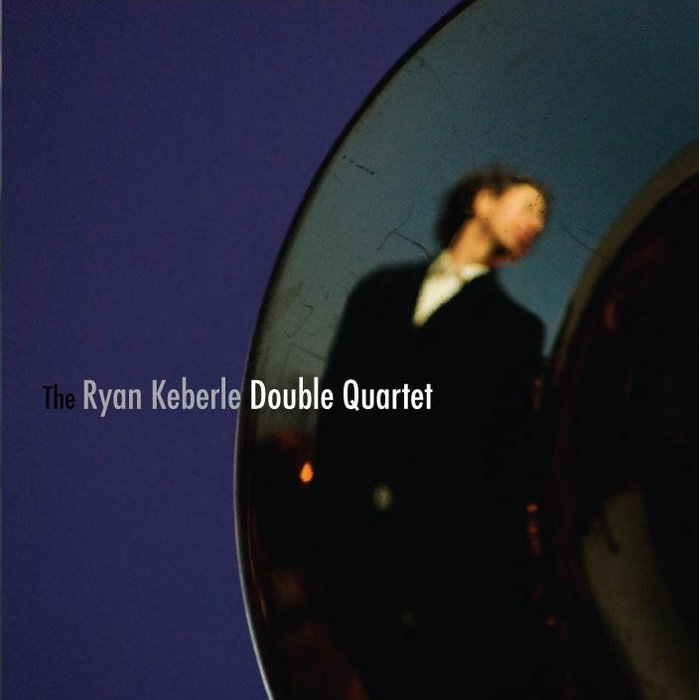 Released on Alternate Side Records, 2007

"warm and breezy"..."neatly layered horn passages stand out throughout the disc, which is distinguished by Keberle's ever-cheerful solos."


"sprawling, multi-themed approach to composition"..."full of drama"... "The opening track, 'Something Speaking,' sets the bar high, creating inventive arrangements with austere melodic detail"
"Double Quartet indicates Keberle's flowering skills as a composer and arranger that should be fun to trace over the next decade or so"
"A strong player who recalls the vibrancy of J.J. Johnson, the originality of Wycliffe Gordon and the pure tone of Frank Rosolino"

"an auspicious debut...featuring his bright arrangements for this brass-rich ensemble."


"Trombonist Ryan Keberle is one of the most creative jazz artists I have heard in sometime. His new CD release Double Quartet is a fantastic debut release that makes you wonder what else this young gun has in his pocket."
"The real winner hear is anyone who sits with this recording because it is one of the years best!"

Ryan Keberle, 26, has covered a lot of ground since arriving in New York from Spokane, Washington in 1999. Having earned degrees from the Manhattan School of Music and Juilliard’s nascent Jazz Studies program, he has also been schooled on the bandstands of some of the most forward-looking large ensembles, including the Maria Schneider Jazz Orchestra and Darcy James Argue’s Secret Society. It stands to reason that he would choose a “double quartet” format for his debut as a leader. “I have a soft spot for brass in general,” says Keberle, who fronts a strong rhythm section and plays a fine trombone but doesn’t stop there. We also hear a vibrant canvas of trumpet, French horn, second trombone and tuba, seamlessly integrated with the standard quartet, generating broad tone colors and lending the session a flavor of boundless surprise. “The sonorities and overtones you can create with brass are really amazing, especially with musicians of this caliber,” Keberle marvels. “With four people playing perfectly in tune, it almost sounds like there’s twice that many.”

Much of today’s expanded ensemble work involves strings: think Ted Nash’s Rhyme & Reason, Tom Harrell’s Paradise, Quinsin Nachoff’s Magic Numbers, Jeremy Pelt’s Close to My Heart or Gil Goldstein’s Under Rousseau’s Moon. Fine efforts all, but Keberle points in a different direction. And the span of his influences is impressive: from J.J. Johnson’s little-known and hard-to-find “Euro Suite” – “some of the most gorgeous writing you’ve ever heard,” Keberle remarks – to Brad Mehldau’s Largo, which, for all its experimental production values, is in many respects an album of chamber jazz. Wayne Shorter’s Alegría is another notable precedent. “I’m interested in making really warm music,” notes Keberle, “music that connects to all listeners.” To that end, he’s sought inspiration not only in the obscure corners of the Third Stream, but also in the realm of pop songwriting. Lennon and McCartney are overt influences, as the inclusion of “Blackbird” and “Norwegian Wood” makes clear. But Keberle also invokes Sting’s Ten Summoner’s Tales: “Almost every track is in odd meters, but when I heard it around age 14, I didn’t know that. The songs are so organic that they don’t feel odd at all.” You’ll hear that ideal reflected in the intriguing polyrhythm – 3/4 against 7/4 – at the start of “Organic Rodeo.”

The son of musician parents, Keberle took up classical piano and violin at age five. His early exposure to Ravel and Brahms, to late Romantic and early 20th-century harmony, was formative. “When I started on trombone it was the great big bands,” he adds. “Ellington and Basie were extremely important to me.” How fitting, then, to end up allied with a figure like Maria Schneider, whose ensemble “takes advantage of all these warm textures and has a certain classical sensibility” but employs some of the world’s top improvisers. “Maria’s been a huge influence in terms of learning how to develop a piece without repeating material, keeping the listener involved,” says Keberle.

It also helps to have a fine supporting cast, and Keberle has assembled just that. Drummer Brad Wentworth was Keberle’s first roommate in New York. “He has an almost telepathic sense – he anticipates my every move as a soloist,” Keberle says. Pianist Adam Birnbaum and bassist Matt Brewer were Keberle’s schoolmates at Juilliard. Birnbaum comes from a rigorous classical background but can play “anything in any style.” Brewer is emerging as a major force on his instrument, gigging with such artists as Greg Osby, Jeff “Tain” Watts and Gonzalo Rubalcaba and also leading his own group. The brass quartet includes Marshall Gilkes, a formidable trombonist and one of Keberle’s closest friends, who debuted in 2004 with the remarkable Edenderry; Michael Rodriguez, an exceptional soloist who has gained recognition in the small and large groups of Charlie Haden; Chris Komer, a sought-after freelance musician and skilled improviser on French horn (he takes the first solo on “Norwegian Wood”); and Jose Davila, noted for his tuba playing in Andrew Hill’s large ensemble and Henry Threadgill’s ZOOID.

If there’s one track that displays the combined power of these eight instruments, it is “Children of the Night,” a Wayne Shorter classic from the Jazz Messengers album Mosaic, featuring Keberle’s trombone forebear Curtis Fuller. “Shorter is at the top of my list of favorite songwriters in jazz,” notes Keberle. Another is Brad Mehldau, whose “29 Palms,” a solo piano cut from the Places album, appears here as a blossoming, finely woven brass fantasy. The opening is in fact a note-for-note transcription of Mehldau’s piano intro. “When I wrote it out I noticed it was four-part harmony in its entirety, which blew my mind because it’s improvised,” Keberle recalls. “I thought it would be natural to adapt it for the brass.” (Keberle is a professional transcriber for Jazz at Lincoln Center.)

The five Keberle originals survey a range of light and dark moods, opaque and translucent harmonies. Keberle’s agile, authoritative horn cuts through like a beacon. The interplay of the two quartets is beautifully realized, and the brass treatments themselves are rich in variety – from dense four-part interludes to soaring soli unison writing, from bold foreground to subtle background. “Wedding Music” was written at the request of pianist Kris Davis and drummer Jeff Davis and performed at their nuptials by a brass trio. Keberle then expanded it for the present group. “Something Speaking,” by contrast, he scaled down from a big band arrangement for the Juilliard Jazz Ensemble. “What Goes Around” grew out of a writing exercise assigned to Keberle by master trombonist Wycliffe Gordon. (It used to have lyrics.) The ballad “When I’m Away” has an earlier provenance – Keberle wrote it at age 19. Taken together, this music reveals a sophistication and creative restlessness that is anything but common. Conversant with the tradition but current in spirit and unique in format, it gives us reason to be optimistic for Keberle’s, and jazz’s, future.